SpyShelter protects you where your antivirus can’t

Why Antivirus software is ineffective?

While anti-virus databases will always remain an essential part of any security solution, they cannot be relied upon on their own. This is because they are reactive; they rely on databases of known viruses and malware in order to detect and remove a threat. Sure, they may recognise a well-known commercial keylogger or a virus that’s been out for six months, but most hackers are more sophisticated than that! If a keylogger is not known to the security application then it will not find it, rendering the so-called “real time protection,” of the world’s best known antivirus suites ineffective. It can take months for antivirus labs to discover a threat, which in the mean time can cause serious damage. Protecting against modern monitoring malware requires an entirely different approach. The only way to truly protect yourself from keyloggers is with a dedicated real time anti-keylogger which looks for and blocks suspicious logging behaviour. SpyShelter is an award winning anti-keylogger which was specifically designed to stop all monitoring activities.

Even with keylogger present in the system, SpyShelter manages to scramble the text, making it useless for keylogging malware.

SpyShelter is a real time protection application, which monitors vulnerable and weak spots in your system. Once a dangerous action is detected, SpyShelter will immediately stop it, before the execution of malicious code takes place. SpyShelter relies on detecting suspicious actions rather than using malware-database, therefore it can detect malware before anti-virus labs even discover the threat. SpyShelter protects against keyloggers, webcam loggers, trojans, RATs and other malicious applications which aim to steal your data. SpyShelter ensures that the sensitive data you enter and store on your computer will not get stolen by criminals for their own use. SpyShelter is an award winning anti-keylogger which was specifically designed to stop all monitoring activities. 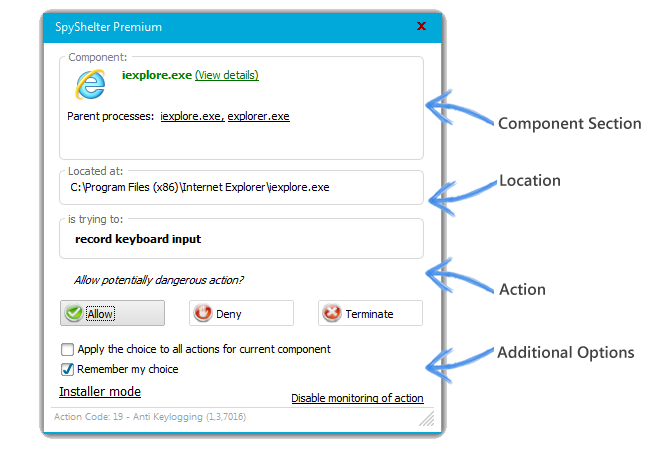 Example of a SpyShelter Alert window